For both, steam drum systems as well as once-through steam generators (OTSG) systems, we must have uninterrupted flow of water through the tubes in order for the system to continuously generate steam.

For an OTSG system, water travels only one time (single pass) through the boiler tubes before being converted to steam and sent to the steam turbine generator set for producing electricity. On the other hand for steam-drum systems, water has to travel many times (multiple passes) through the tubes before it leaves as steam.

Based on two basic types of circulation commonly used, high pressure (HP) steam producing boilers can be classified as:

Referring to figure-1(a), in the downcomer (pipe through which flow is directed downwards), no steam is present and the tube section A-B is not heated. Heat input generates a steam-water mixture in section B-C, usually referred to as riser (pipe through which flow is directed upwards). Due to the fact that the steam-water mixture at section B-C is less dense (since it is hotter) compared to the water of section A-B, thermosiphonic effect (gravity) will cause the water to flow donwards at segment A-B and upwards at segment B-C towards the steam drum.

A pump is added in the closed flow loop system indicated in the section A-B of figure-1(b). The pressure difference created by the pump (pump head) helps control the water flow rate. A pressure reduction device (orifice or similar) is also typically used, as an additional control mechanism.

The specification sheet for a shell & tube heat exchanger can be prepared only when its process design is finalized and all the process parameters are...

(It should be noted that the use of Stokes law is valid only for Reynolds number lower than 2...

Damages due to Pump Cavitation

Let's look at possible pump cavitation damage.
Damage to pump mechanical seal
Mechanical seal are very important in any pumps as they prevent any foreign... 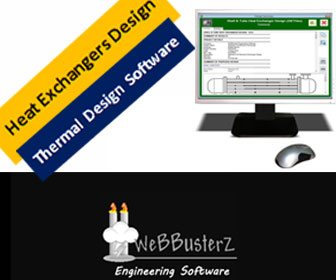